DEAR ALL!  I hope you will forgive that I haven’t posted for a few weeks – after 9 very full-on months of filming, supporting the kids, advising for ITV and C4 News, and getting the fim out to the legal and campaign world I needed a short break. ` the good news is that the film is running DAILY until Sept 28th in the EDINBURGH FESTIVAL as part of the brilliant PROTESTIMONY exhibition. see the link below http://www.assoimagine.com/documentation

Plus there are another 10 or so screenings lined up for the next month, I will list them all on the right-hand column of this page later today- some very exciting  ones indeed ! More later. All v best Sue x

13th July 2017 I was invited onto the BBC Victoria Derbyshire show this morning. Responding to the new Butler Sloss report on trafficking. Said what i want to say which is that while we might berate the French police for their harshness, the HOME OFFICE PAYS THE FRENCH POLICE TO DO THIS.  With our tax dollar.http://www.bbc.co.uk/iplayer/episode/b08xqb54/victoria-derbyshire-13072017  Item is at 01.07.53 -01.19.27 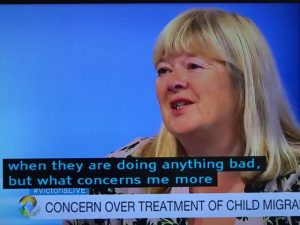 12th July 2017 Twice on the news today! The Butler-Sloss report on Trafficking is  out so I’m back in Calais, working with ITV News (at 10)  http://www.itv.com/news/2017-07-12/vulnerable-lone-child-refugees-have-been-failed-by-british-inaction-says-report/ and C4 News  https://www.channel4.com/news/migration-crisis-are-we-fuelling-people-smuggling to get items out this evening Weds. Its horrendous- there are now several hundred kids back here, and they are sleeping in the woods, in pouring rain. They are constantly harassed by the CRS (riot police) who spray then with gas and with pepper spray. They also spray their blankets/sleeping bags/tents if they have any (given by Auberge des Migrants)  with pepper spray which makes them unusable. Every night. No-one seems to think about a future plan for these young people. A daily round of  sleeping in the wet, being shocked awake in the night by copes, hounded around the industrial waste land of Calais, (They’re not allowed to sleep ! as that would count as them being ‘resident’) then they spend the later day trying to get on trucks, trying to get anywhere that might not turn them away nor treat them like animals or crimials. Its one of the worst things I’ve seen on all my trips. We have to keep pushing to get a resolution.

Dear all thanks so much those of you who’ve got to screenings ! See more listed at the side for July 11th and 18th.

The film is also going to be svcreened in Parliament and a number of other ways it will have real impact.

All very very best everyone!